"Face and neck"
Eyebrow and forehead

With age the brow tends to sag so the whole face may have a tired, or even sad look and can also create the impression that there is superfluous skin on your upper eyelids. Occasionally, depending on genetics, even young people may experience this problem. However, most patients require only the lateral brow lift correction of the lateral tail of the brow). In this case, we can perform  a temporal brow lift, which uses only the incisions at the temples.  This can be used to alleviate a droopy laterally eyebrow and lateral hooding of the upper eyelid.  It is often done in conjunction with an upper eyelid blepharoplasty.
Depending on the severity of the problem, a drooping brow can be corrected in several ways and create a younger and fresher look. 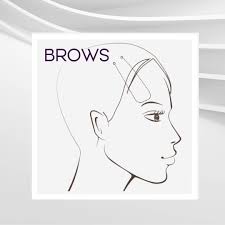 Although thread lifts have a doubtful reputation concerning the durability of the results when used for face and neck lifts, the use of thread lifts for brows is promising.

The operative techniques and fabric of the treads are in a constant evolution and in our clinic we consider a brow lift to be the only good indication for thread lifting. The operation can be performed under local anesthesia.

The result is immediately visible and can hold for a few years.

A direct brow lift is a very powerful and predictable technique for correction of the brow position. The surgery can be performed under local anesthesia and consists of removing a wedge of skin just above the brow and repositioning the brow at a higher level. The resulting scar is practically invisible and sits just above the hairs of the brow. If necessary the scar can be camouflaged with a medical tattoo, but that is extremely rare.

The temporal lift is definitely the preferred method in our clinic, because of its outstanding and long lasting results. The procedure takes place under sedation and takes about 2 hours. An incision is made in the hair bearing temple area on each side, so the scar is camouflaged by the hairs and invisible.

When the middle part of the brow is also sagging, a forehead lift can be considered. This results in a higher repositioning of the entire brow. The surgery takes about 3 hours under sedation. Three to five small incisions are made in the hear bearing scalp just a little behind the frontal hairline. No hair has to be shaved. In the postoperative period, a marked edema may be noticeable around the eyes for about 2 weeks maximum.

Heeft u bijkomende vragen over plastische of esthetische chirurgie?